Since Collabware CLM’s first release, it has been solving the compliance ECM challenge on SharePoint. Those that have attempted to work with SharePoint’s out-of-the-box (OOTB) Records Management features have battled with the configuration of Information Management Policies and the challenges of managing and deploying them in an enterprise environment. The retention configuration limitations are one of the first problems we chose to solve. Here’s an excerpt from a blog post I wrote years ago showing a retention to delete an item 7 years after being declared a record: 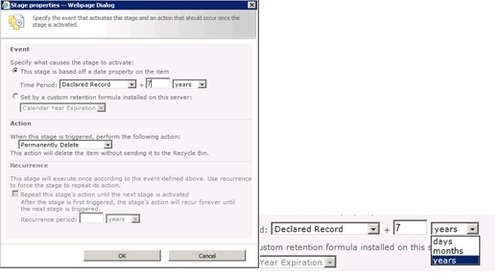 The above example is common, but it lacks the ability to control the time period. What if you wanted the Time Period to be from calendar years, or from the company’s fiscal date? There are other retention schedule limitations that aren’t possible using SharePoint OOTB.

With Collabware versions prior to the release of Collabware CLM 2016 we built a feature known as “Events”. The idea that an item’s retention couldn’t be calculated because the trigger date was not known. I.e. an “event” would have to occur to set this trigger date that would then allow the date calculation. In the example following, retention is calculated 7 years after an employee’s termination. Thus, the calculation for a document is to destroy after 7 years from the employee’s termination date. Here’s how it would be setup: 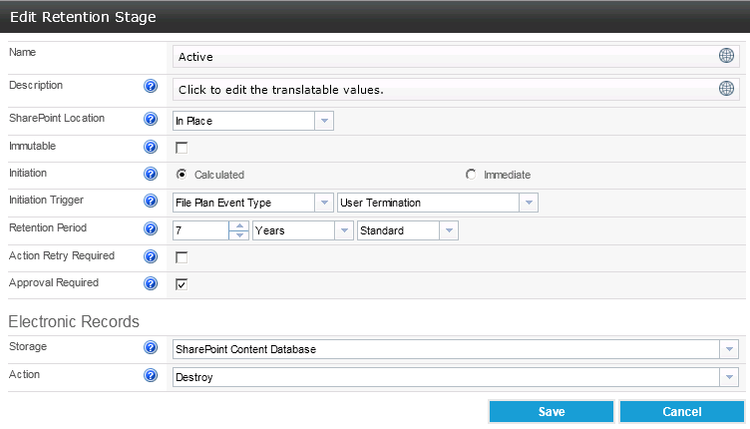 The Lifecycle Details for a Record: 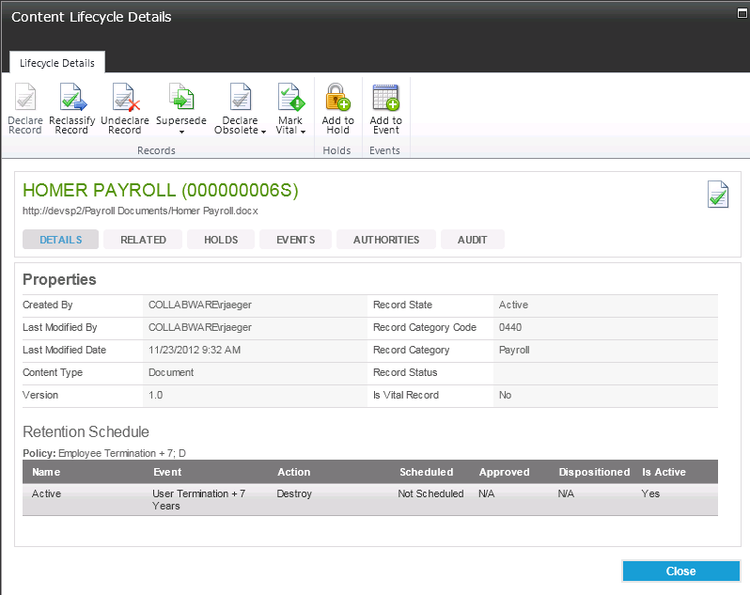 This can be solved a couple different ways in Collabware CLM 2016 using the workflow engine (our custom workflow engine built specifically for managing content’s lifecycle). Below is a screen shot of an example workflow that implements the events described above. 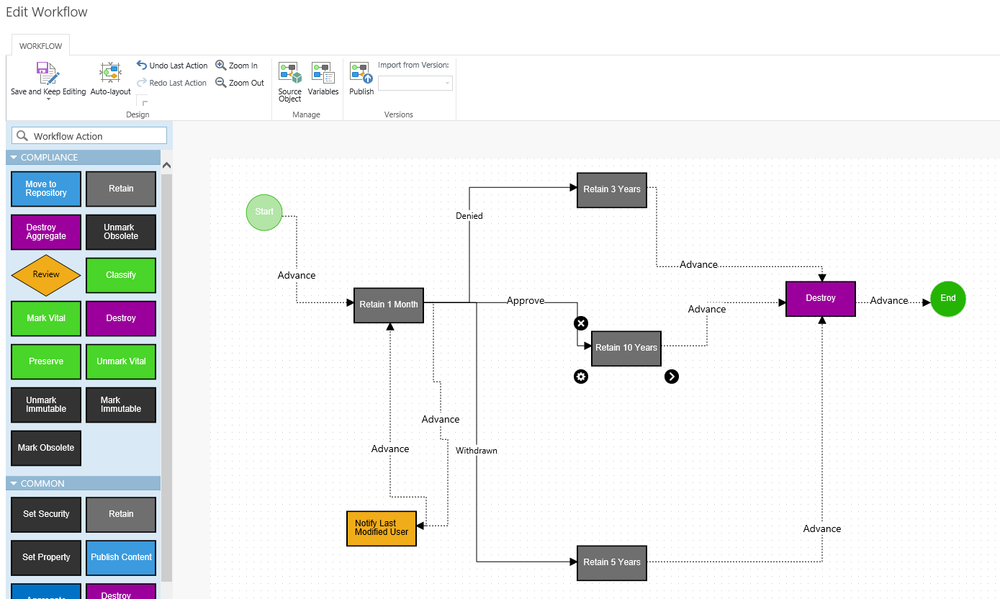 The first thing to notice is that the retention is built using our new workflow system! What is workflow in Collabware CLM? It is a user defined state machine with a Start, an End, and various other actions (shown as rectangles) and connectors (arrows connecting actions). When a workflow is started on an item, it begins at the ‘Started’ action and will attempt to transition to the ‘End’ action. The Advance connectors are immediate transitions; the workflow will immediately attempt to take that transition to the next action. The Retain actions are configured to pause the workflow engine from progressing the current state indefinitely or until an Event is triggered. In the example shown, when this workflow is started on a SharePoint item, it will transition from the Start action to the Retain 1 Month action. At this point, the workflow engine pauses. It is waiting for 4 possible events to happen:

2)An Approve Event is triggered

3)A Denied Event is triggered

4)Or, a Withdrawn Event is triggered.

Here’s the view of the running workflow on a SharePoint document: 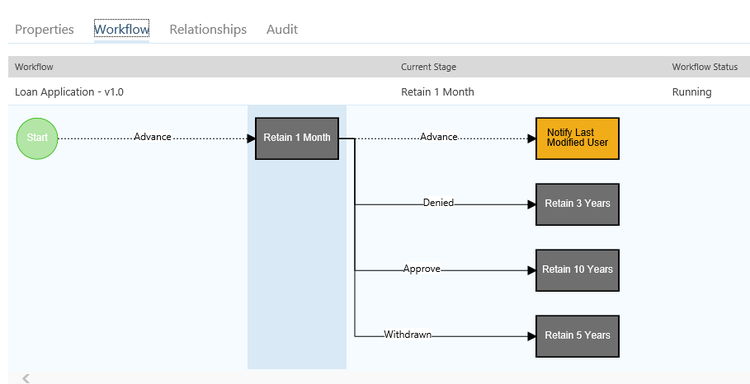 A loan application waiting for an event to be triggered

The user has the ability to trigger any of the next events using the ribbon on our Lifecycle Details. 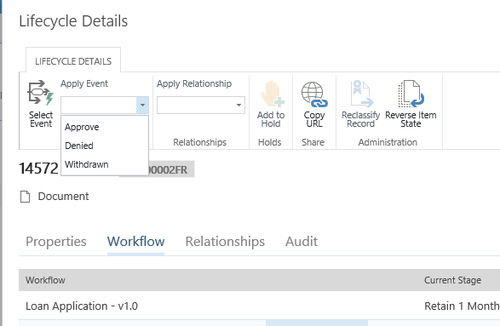 This example highlights new and improved functionality regarding events, and a quick introduction to the new workflow engine. There are other connectors and actions used by the workflow that aren’t shown in this example and provide new capabilities to your ECM on SharePoint with Collabware CLM 2016. We look forward to hearing your feedback on the new workflow system. Have an idea for a workflow action that we don’t currently have? Let us know and it might make it into a future release! 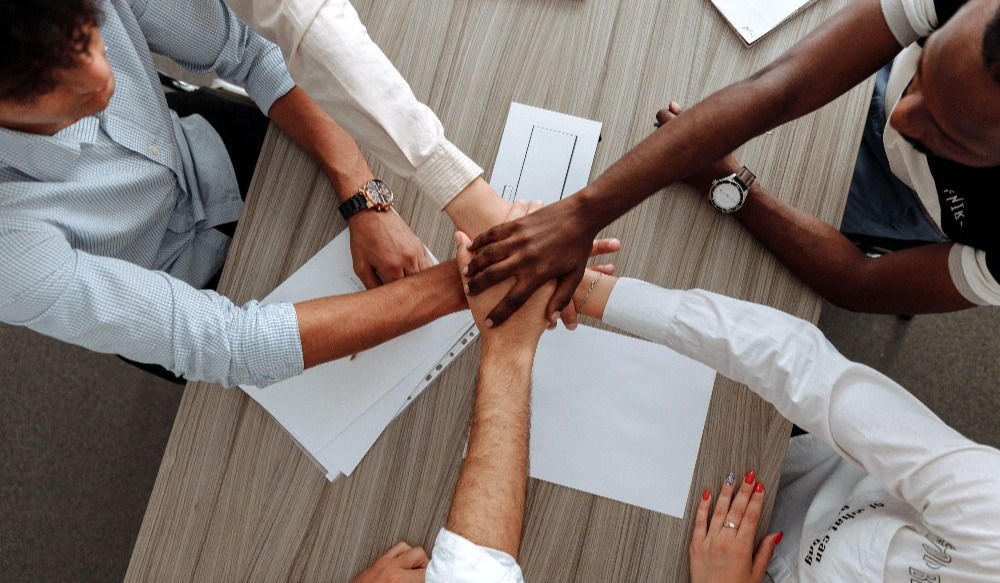 How to Push the Business Case for Records Management Organization-Wide 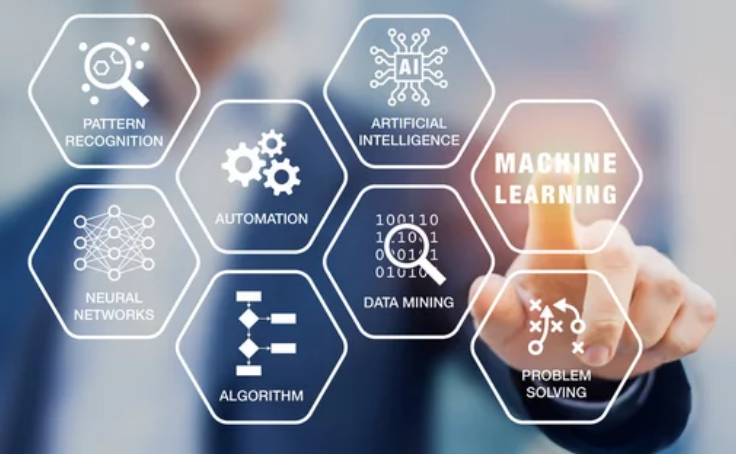